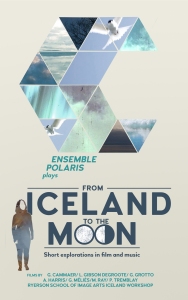 Ensemble Polaris has explored the wonderful world of music and film since 2013, beginning with an improvised soundtrack to Georges Méliès’s 1902 classic Le voyage dans la lune, and the premiere of Andrew Downing’s music for Man Ray’s Étoile de mer, written for the band through a Commissioning Grant from the Canada Council for the Arts. In 2015 Polaris collaborated with faculty and students of Ryerson University’s Image Arts Department to present the other works on this DVD, several of which were created during film workshops in Iceland in 2012 and 2014. Films by Pierre Tremblay, Gerda Johanna Cammaer, Liz Gibson-DeGroote and Alicia Harris are included. Gabriele Grotto’s Ego sum resurrectio, first presented in 1989 with music by the Cera brothers, is resurrected here with a new score written for this project by Andrea Cera.

From Iceland to the Moon is available here: http://www.pipistrellemusic.com/ensemble-polaris/from-iceland-to-the-moon/

NOTES ON THE FILMS:

A glorious morning, the last day of July

Sliding down the landscape in the south of France, the Massif des Maures

The light is beautiful, making the colours vivid, vibrant, energizing

Green of summer and ochre of the earth

The gradient of the blue sky and the Mediterranean

A visual experience, a kaleidoscope

It’s nice to remember that life is sometimes in beautiful harmony.

Music: The music for Iceland was improvised to film in the recording studio, and includes fragments of Maístjarnan (H. Laxness/J.Ásgeirsson) and Muezzin (Andrea Cera). We did two complete takes in the session and the resulting soundtrack makes the best use of both, with a couple of edits.

Gerda Cammaer on GLISSANDO (2017): Glissando was shot on a pocket camera, while traveling in New Zealand. The short five-minute ride on Welli’s cable car is extended in space and compressed in time by combining the ride up and down into one. The experience of this piece meant to be similar to a “lento pensivo” in music, a state of mind more easily achieved far away from home then in our busy lives. While Salamanca is simply the 2nd or 3rd stop on the line (depending if one travels up or down), as an imaginary place it represents how we re-imagine the sites visited abroad in our memories.

Alicia Harris on ALL THINGS BUT FORGET(2014): An experimental film shot in Iceland during the Summer Solstice of 2014. The title is from Eloisa to Abelard by Alexander Pope.
Gabriele Grotto on EGO SUM RESURRECTIO (1989): Ego Sum Resurrectio is the first film I accomplished in 1989 as a student at the Academy of Fine Art in Venice, realised as a consequence of the strong impression received while watching historical experimental films (Maya Deren above all). It was the first time I used a movie camera (super 8) and in that initial act, I felt the urge to stage the visionary representation of death (starting from the end), and this is, in fact, the subject of the short film that rotates around the rhetorical figures of classical horror films and symbols of ordinary funereal imagery. Fantastical presences, spaces, objects, and real entities live in a single imaginary dimension, between presence and absence, detachment and emotional participation, documentary filming and fiction. Of the music, three versions exist: (1) composers and performers: A. Cera/M. Cera/G. Grotto (1989); (2) composer and performer: Gianni Bertoncini (1991); (3) composer: Andrea Cera, performed by Ensemble Polaris (2015).

Andrea Cera: The music I wrote for Ego Sum Resurrectio is a song whose melody is not audible. The melody was left in the paper, destined to be replaced by the movie’s images. Like the souls of those who are gone, its presence is hidden inside the living, and only the curious can sense it.

LE VOYAGE DANS LA LUNE is a 1902 French silent film directed by Georges Méliès. Inspired by a wide variety of sources, includingJules Verne’s novels From the Earth to the Moon and Around the Moon, the film follows a group of astronomers who travel to the moon in a cannon-propelled capsule, explore the Moon’s surface, escape from an underground group of Selenites (lunar inhabitants), and return to Earth with a Selenite captive. It features a cast of French theatrical performers, led by Méliès himself in the main role of Professor Barbenfouillis, and is filmed in the overtly theatrical style for which Méliès became famous.

Originally from Belgium, Gerda Cammaer is a filmmaker, curator and scholar. He work has been shown at various festivals and in art galleries in Canada and abroad. She specializes in experimental and documentary film, but her interests also include film history, the history of film technology and forgotten or overlooked (film) histories such as amateur films and home movies, and how these compare to emerging practices. She currently studies how new (mobile) technologies are causing a revival of various forms of microcinema, focusing on amateur travel films. Gerda Cammaer is Associate Professor at the School of Image Arts of Ryerson University.

Interdisciplinary artist Pierre Tremblay came to the School of Image Arts at Ryerson University as an Associate Professor after twelve years in Paris where his work can be found in the collections of the Musée Carnavalet, Bibliothèque nationale and the Musée Rodin. He has also taught at the Parsons School of Design in Paris. His artistic practice, combining new technologies and video, questions the world in flux, how we see and perceive. Recent projects include 300 Days of Indulgence – Negotiating with the Beyond, Continuum and Portraits in a Sentence. Exhibitions of recent note include Meta Incognita at The Photographers’ Gallery – The Wall, London, England, Dans la nuit des images, at the Grand Palais, Paris and le Mois de la Photo, Montreal, along with festival screenings in Canada, Italy, Australia, China and Brazil. In his role at Ryerson, Tremblay has facilitated conferences and edited books that have brought scholars and artists from Ontario, Quebec and France together for cross-cultural exchange on a variety of new media topics. http://www.nunavutlights.com/pierre

Liz Gibson-DeGroote is a filmmaker and video artist from New England, now settled permanently in Toronto. She completed her BFA in the Studio for Interrelated Media at Massachusetts College of Art and Design in Boston and her MFA in Documentary Media at Ryerson University. Place and landscape are recurrent themes in her conceptual and documentary work, which often investigate visceral connection to water and the ocean.

Alicia Harris is a filmmaker from Toronto, who specializes in directing and production design. She is especially passionate about documentary filmmaking and traveling. In 2014, she visited Iceland and created two films during the summer solstice, including all things but forget, which is currently being screened in local exhibitions, and earned the accolade of Best Editing at Maximum Exposure (2015). Her short documentary “Fatherhood” has been screened locally and internationally, and won her the Royal Reel Award at the Canada International Film Festival (2015). Additionally, Alicia received the Jack Kuper Film Award (2014), based on her work during the 2013/14 academic year. Alicia is currently pursuing a BFA in Film Studies, and a Certificate in Design for Arts & Entertainment at Ryerson University. You can view a selection of her work at vimeo.com/aliciaharris.

Born in Thiene, Italy in 1966, Gabriele Grotto studied at Venice’s Accademia di Belle Arti with the video artist Fabrizio Plessi, where he created his first short films in super 8, inspired by experimental cinema. He continued his filmmaking activities with the creation of short films (experimental and narrative fiction), video installations, and documentaries, which were screened in independent film festivals and contemporary art exhibitions. He has collaborated with theatre and dance companies, and in his activity as a filmmaker/musician he has created various projects exploring the interaction between image and music: live music for early-era silent films, and performance for drums and video.

Andrea Cera studied piano and composition at the Pollini Conservatory in Padua, and electronic music at IRCAM (Cursus Annuel de Composition et d’Informatique Musicale) in Paris. In 2002/2003 his installation Innig for 24 loudspeakers in a corridor was presented at the Centre Georges Pompidou as part of the exposition Roland Barthes. In 2004 he was invited to the Studio national des Arts Contemporains-Tourcoing in Le Fresnoy, where he created NightRun, an interactive installation based on the screams of the visitors, and also wrote a piece for the Nouvelle Cuisine Big Band (MIDIfreaks Corridor Catapulte) for the festival Le Printemps des Arts in Munich. In 2005 for the French choreographer Hervé Robbe he created a new composition based on the capture of the dancers’ voice and movements (Mutating Score), and, for a second residence at Le Fresnoy, Reactive Ambient Music, an installation based on the real-time analysis of the soundscape. In collaboration with composer Gérard Chiron, he realized a collection of sounds for the D_DAY exposition at the Centre Pompidou. In Italy, he presented Undertones et Nature (sound installations) in Milan’s TriennaleLab, Palermo’s Castello della Zisa (with the collaboration of Agon ArsMagnetica) and Rome’s Galleria Lipanje-Puntin. He lives in Malo, a small town near Vicenza, in Italy, and teaches at the Conservatoire of Padova. He’s also the brother of Polaris guitarist Marco.

Andrew Downing is a Toronto based double bass player, cellist, composer and educator born in London, Ontario in 1973. He plays primarily in the creative jazz scene in Canada, but also performs classical chamber music, improvised music, folk and roots music, and world music. He practices the unusual craft of tuning his bass in fifths an octave lower than a cello. His teachers include Jack Winn, Dave Young, Don Thompson, Shauna Rolston and Joel Quarrington. His own projects span a wide variety of styles and practices. Most recently, he has begun a collaboration in İstanbul, Turkey with ud (Turkish lute) player Güç Başar Gülle that incorporates Ottoman Classical music in a collection of new compositions for ud, cello, percussion and kaval (a Turkish folk instrument). Their first album Anahtar will be released in October of 2013. He also has a collaborative multi-media project with Canadian songwriter John Southworth and visual artist Yesim Tosuner called Easterween featuring songs written by John and arranged by Andrew for his 7-piece chamber ensemble. He also leads his chamber-jazz ensemble Melodeon, which plays live scores for silent films such as The Cabinet of Dr. Caligari, Phantom of the Opera (with choir), Maciste in Hell, Impossible Voyage and The Shock. As a composer, Andrew has written pieces for Nordic Folk group Ensemble Polaris, banjo player Jayme Stone, The Vancouver Bach Choir, Ensemble Meduse, Toca Loca and The Prince George Symphony, and has written arrangements for Patricia O’Callaghan, The Gryphon Trio, The Annex Quartet and The Art of Time Ensemble. He has won two Juno awards, one for his own recording Blow The House Down with his former group Great Uncles of the Revolution, and one with the Vancouver-based group Zubot and Dawson. He has also won two West Coast Music Awards, a Socan Award, and the Grand Prix de Jazz from the Montreal Jazz Festival. Andrew currently teaches double bass, composition and improvisation at the University of Toronto and has taught at Wilfred Laurier University, the Banff Centre’s Jazz Workshop and the Creative Music Workshop in Halifax.

The Canada Council for the Arts, who supported the production of this DVD.

The Ontario Arts Council and Toronto Arts Council, who supported the performances for which these collaborations were originally created.